Rockcast Monday.11.11.13a; A Tribute to Lou Reed. Starring Lou Reed, The Little Willies, The Primitives, The Killers, Simple Minds and The Velvet Underground 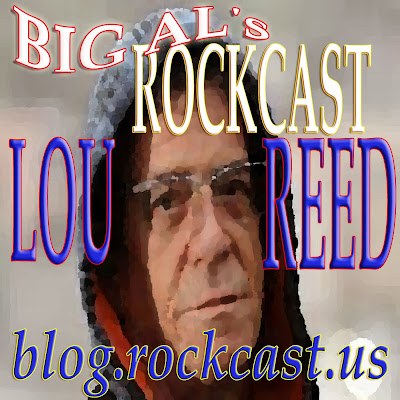 I remember as a teenager having the opportunity to meet Lou Reed. I was afraid to
approach him because the man had this steel eyed gaze and stern look that made him
scary to me. I was convinced that day the man was a force of nature. Being into the
guitar players of the day I was completely impressed by his playing. He was a very
underrated guitarist. His deadpan vocals were by no means Robert Plant but it allowed
normal guys like you and me to sing along without straining a cajones. Of course all
of us have at one time or another sang "Hey Babe, take a walk on the wild side"...
It wasn't until a decade later my roomie Tom Quieros [Props Tommy Q!] reintroduced
me to Lou's music catalog. Truly an American original and one of the great twentieth﻿
century story teller songwriters. Listen to this set and you will hear what I'm saying.
God Bless ya Lou!

Once again sir a masterpiece of a set. You really know your Lou Reed. Many of these songs I was unaware of and had never heard. That's why I listen to Rockcast in The first place. again BRAVO!
Lou's influence will continue over many genres of Rock. He is as you said, a musicians musician.

Lou was the man.

I love your artwork! It goes unheralded. You are one creative MOFO.